Mike just pointed out some good music to me... a band called Thunderbirds Are Now. You might want to check them out. :-D Not my normal genre, but the fact that I find myself still rocking out to them after 45 minutes says something good about them. :-P

I sat around yesterday working on a new logo for Phreadom... here's what I came up with: 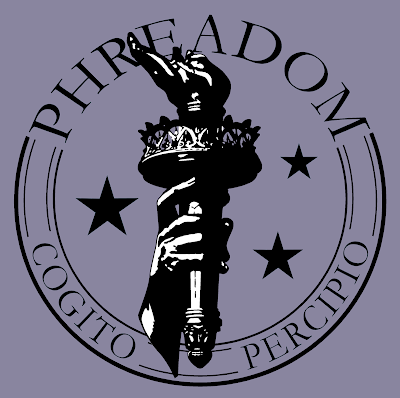 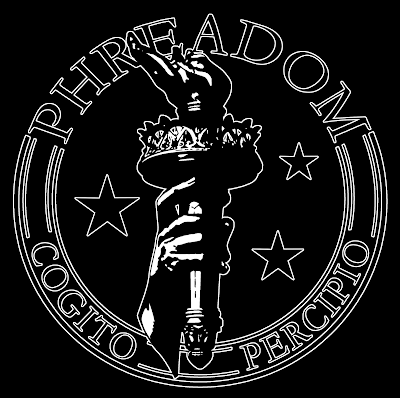 A few things that went into the logo were the hand holding the torch, as a beacon... as the website says "A beacon of truth in dark times". Also, the three stars... 3 is an important number in numerology, and while personally I think numerology is a huge crock of shit, some of the ideas behind it are very fitting in a symbolic sense.

Three solves the discord created in the polarity of two, resulting in a new integration and wholeness. This can be seen in the divisions of a human: mind, body, and spirit makes us whole. Three can also relate to expansiveness and learning through life experiences. It is considered to be lucky, and is often associated with money and good fortune. Three can depict several people joining together to achieve a common goal, whether through a social or professional affiliation. Three also represents communication of all kinds, expression, drama, acting, and humor. Although three possesses attributes of wisdom, understanding and knowledge, negatively it can exhibit pessimism, foolhardiness and unnecessary risk taking. Three is seen as a very magical number. In some cases, the number three can take on some negative aspects and is seen as demonic or unnatural, as there are no creatures in our world who walk upon three legs.
-- From Wikipedia

Mike was putting forth the idea to flesh that out into a more rounded sum of "cogito, eruditio, percipio, devenio veritas", which means roughly "Think, learn and teach, understand and reach the truth.", with Eruditio meaning "instruction, teaching / knowledge, learning" and "devenio veritas" meaning "to come to, arrive at, reach ... truth".

So I may end up doing another variation on the logo to try to fit those aspects in.